Phenomenal and Functional: A Look at the World’s Most Expensive Kitchen Renovations

Renovations to the kitchen can be costly. But how does the price of a complete kitchen remodel change from country to country? Denmark spends the most on kitchen renovations, according to statistics from Compare the Market, with an average of $42,993 USD. That sum is around 84 percent of the average annual salary in the United States!

Meanwhile, the average cost of a kitchen makeover in the United States is roughly $25,000 dollars (36.38 percent of the average annual income). Hong Kong was the least expensive of the countries analysed, with refurbishment costs averaging $3,747 USD (approx. 13.30 percent of the average US annual income). Compare the Market gathered data from a variety of sources, including government organisations, construction associations, and remodelling professionals, to come up with these figures. But there was one point on which they all agreed. Kitchen remodelling costs vary depending on where you live.

What about the world’s most opulent, opulent kitchens? What are their whereabouts, and how much did they cost?

We explored the internet for some of the world’s most expensive kitchen makeovers, inspired by Compare the Market’s report: 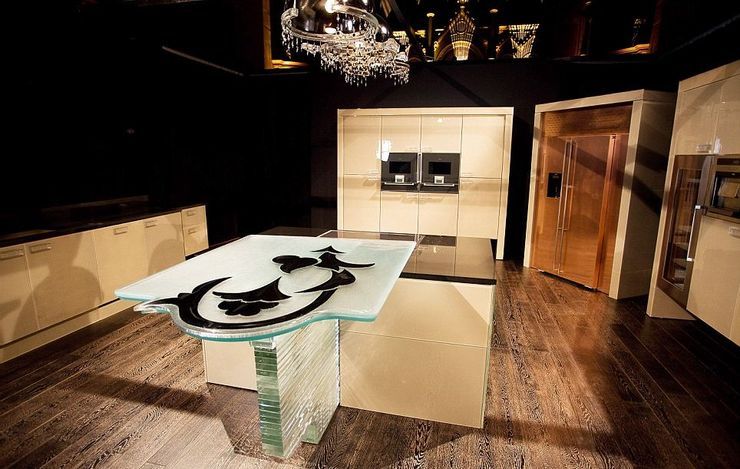 This London kitchen, dubbed the “world’s most expensive kitchen,” cost more than £1 million ($1.6 million USD). Claudio Celiberti designed the refurbishment, which took over a year to complete. The luxurious kitchen has other extremely snazzy features like solid copper-lined cupboards, a crystal island, and a stone surface, and is made with only the highest-quality materials, including the world’s greatest crystal “Crystal of Murano.” The cost of the crystal island alone was £36,850, which was more than the average overall cost of a kitchen renovation in the United States. The chandelier, though, is unquestionably the space’s pièce de résistance (also designed by Celiberti). This beauty, made of Swarovski crystal and Murano cristallo, cost around £26,400 to make. Naturally, this is still a working kitchen, and every kitchen need appliances.This kitchen is definitely one-of-a-kind, with £24,000 worth of Gaggenau handcrafted equipment, including a £5,000 fridge and a £1,714 espresso machine. 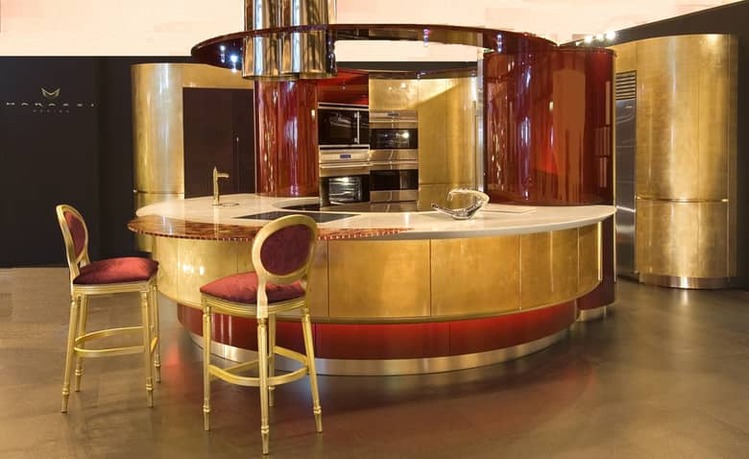 This $450,000 limited edition kitchen, nicknamed “the world’s most expensive fitted kitchen,” combines classic elegance with technological touches to create an aesthetic appropriate for modern luxury. Swarovski crystal lights emphasise the dazzling, sparkling surfaces of this Marazzi Design design. Crocodile embossed leather, Venetian ink-stained gold glass, and 24-carat gold leafing are among the other rich details. The appliances are equally amazing (all state-of-the-art and valued around $85,000), with the highlight being a $12,000 Zaha Hadid tap. It’s no surprise that this London kitchen is so wanted and appreciated, with its combination of dramatic shapes and colours, luxurious materials, and modern kitchen gadgetry. 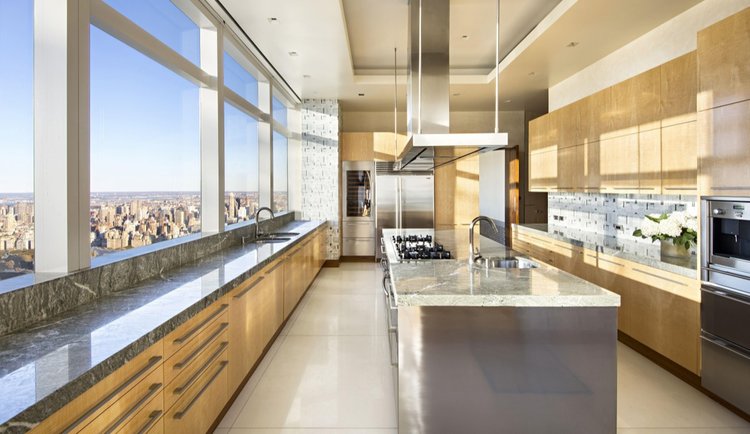 This kitchen makes the list merely because it is located in one of New York City’s most expensive residences. The kitchen, like the rest of the penthouse apartment, is 8,500 square feet of absolute luxury. The area, dubbed “a professional chef’s kitchen,” is outfitted with all of the latest appliances and is given an air of elegance thanks to Alba Chiara marble worktops and Poliform-designed sycamore cabinetry. Another outstanding element of this kitchen is its outlook, which includes a breakfast area adjacent to a media room with spectacular Hudson River views. Imagine enjoying your morning coffee while taking in the most stunning city views (prepared with a top-of-the-line espresso machine, of course!). That’s what I call luxury. 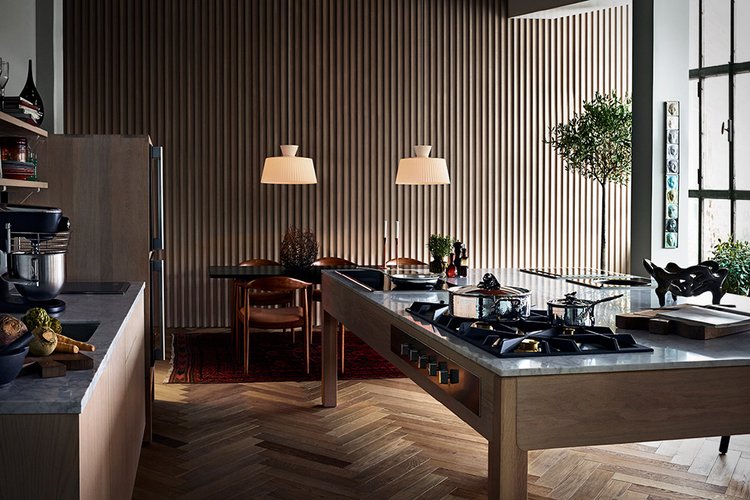 Everyone knows Electrolux appliances are among of the best, so it’s only natural that they’d be the focal point of this kitchen, which cost $322,000 to build. This kitchen, which features Electrolux’s Grand Cuisine Range, has been dubbed “revolutionary” and “the preferred kitchen of Michelin-starred chefs globally.” But it’s not just the equipment that make this kitchen shine. The appliances appear to vanish and blend in with their environment thanks to their reflecting glass surfaces. The kitchen is designed to be practical — although “totally effortless” — despite being created with only the best materials. Imagine having appliances in your kitchen that are not just mostly automated but also programmable.However, when utilised concurrently, they function much better for ultimate cooking simplicity and precision. While it isn’t the most costly kitchen on our list, it is without a doubt the one that best mixes luxury and functionality into a space that anyone would enjoy cooking in. 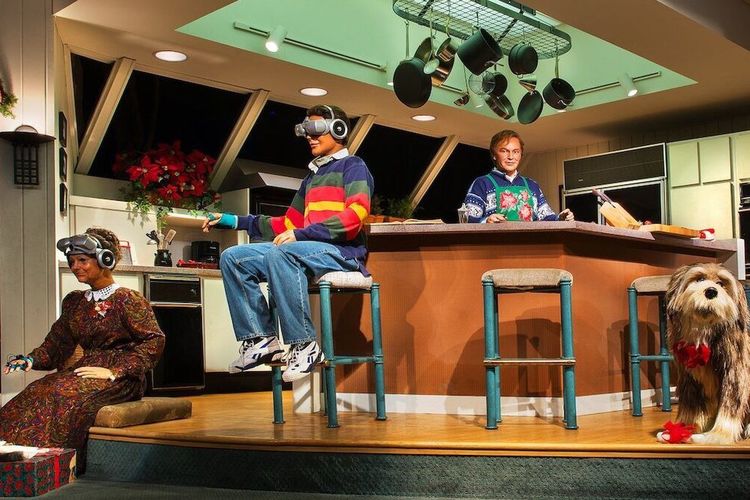 While most of us would never have the chance to cook in a six- or seven-figure kitchen, these rooms offer a creative approach to reinvent the standard cookspace. Kitchens have long been known as places that can easily be changed into visions of the future; one only needs to visit Disney World’s “Carousel of Progress” to see how visionaries like Walt Disney envisioned technology will continue to modify and shape our daily lives, beginning in the kitchen. These kitchens are no different. We continue our search for the ultimate kitchen through their opulent designs, sophisticated appliances, and developing modern interpretations of a more classic environment. 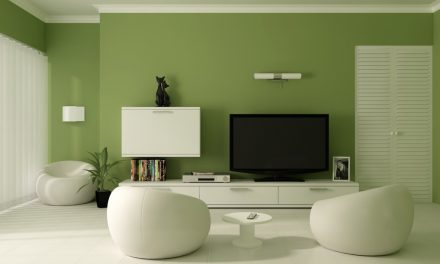 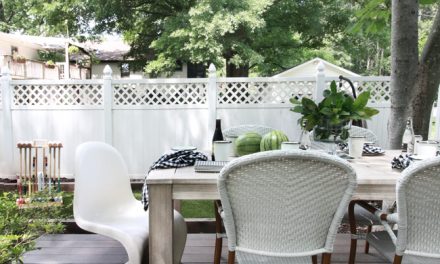 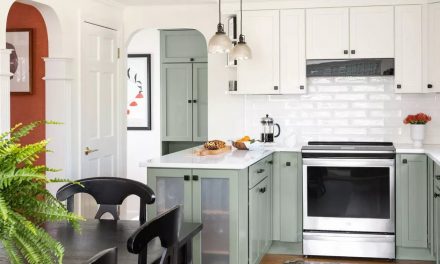 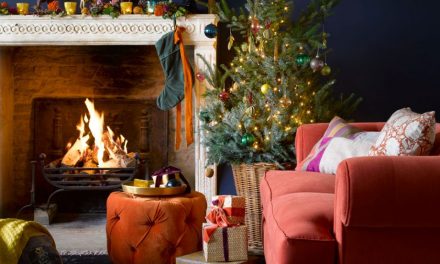